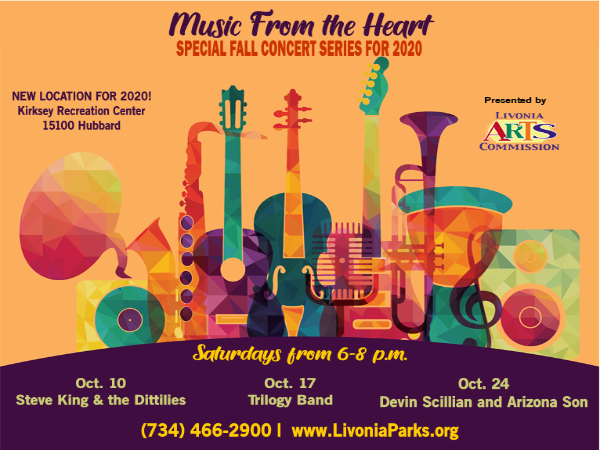 Music From the Heart is returning with a special fall edition! Concerts will take place on Saturdays from 6-8 p.m.

Music From the Heart has a new location this year!! All concerts will take place on the east side of the Jack E. Kirksey Recreation Center, 15100 Hubbard. Please plan on parking in the Five Mile lot. Alternate parking is available in the Rec Center parking lot. Events are subject to change, cancellation and social distancing restrictions due to COVID-19. 1,000 people maximum. Registration is not required. Look for the social distancing circles. For more information, call (734) 466-2900. 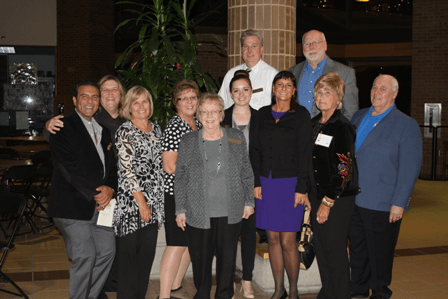 The Livonia Arts Commission exists to create, promote, develop, sponsor, sustain, facilitate, and further the Arts within the City of Livonia. For the mission of the Commission and its commissioners, the term “Arts” shall be defined and literally construed to include the making or doing of things that have form and beauty, and to encompass all forms of Arts including the Arts of music, painting, sculpture, literature, dance, theater, opera, ballet, crafts of all natures, and any other of the performing Arts requiring and exhibiting a level of creativity, skill, or talent.

The Livonia Arts Commission was established in April 1974 and held its first meeting in the office of Mayor Edward McNamara. The first year was devoted largely to identifying cultural resources in the City, establishing working relationships with those resources, and educating the new commissioners in the techniques required to build a fine arts program for a blossoming city.

In 1975 the Commission began presenting a variety of artistic and cultural programs throughout the City. The Michigan Opera Theater and the Oakway Symphony participated in workshops and performances during the City’s first ever “Opera Month.” The first Livonia Art Exhibit made its debut (now called Art From the Heart), and the “Music Under the Stars” program, still going strong in the new millennium, made its premier (now called Music From The Heart). Since that auspicious beginning, the Commission has fostered a rich and diverse series of cultural events, activities, and projects.

Through it all, however, the mission has remained the same - to create, promote, develop, sponsor, sustain, and further the development of the Arts in Livonia. Subsequent Commissions have continued to take that mission seriously and to build upon that heritage in a variety of ways. Today, the Commission fosters programs such as Music from the Heart each summer, the Annual Exhibition of Fine Arts each fall, and the granting of scholarships to high school and college students engaged in the Arts.

In accordance with Title II of the American with Disabilities Act as it pertains to access to Public Meetings, the City Clerk’s Office of the City of Livonia, upon adequate notice, will make reasonable accommodations for persons with special needs. If you need assistance, please call (734) 466-2236 or email the Clerk.